A memorable day on the water with Fly Fish in Costa Rica. 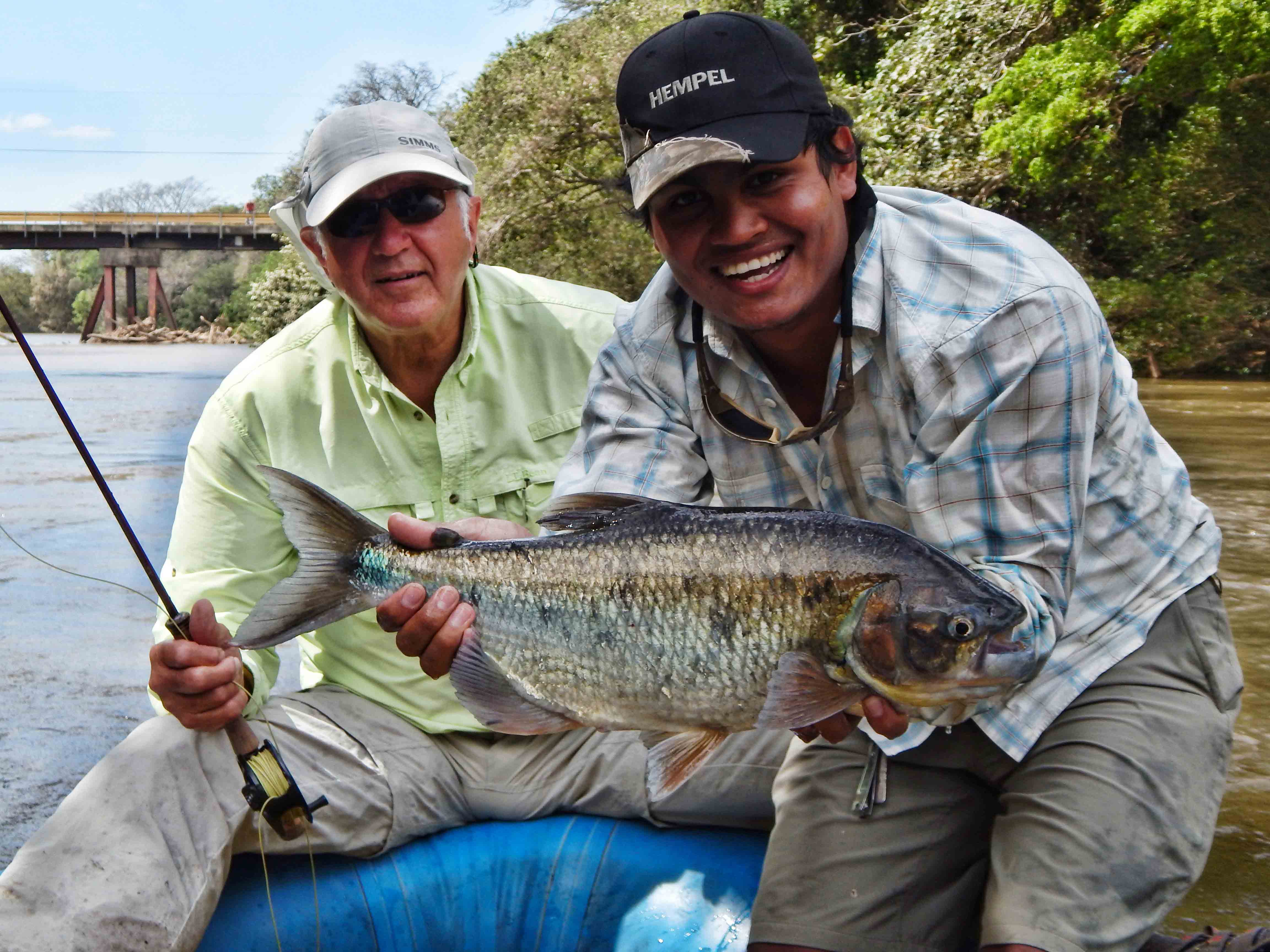 Client Doug Boyd and guide Charlie Chavarria with a nice machaca taken on a fly.

As in much of the world, 2016 and 2017 have brought many surprises here in Costa Rica, including new and unusual weather patterns. As fishermen, we know to take such weather changes in stride, adapting our techniques and locations. Fortunately, the fishing for machaca – one of our favorite tropical freshwater fish species, continues to be outstanding. This year, we caught several machaca to 7 lbs., prime specimens of a unique and little known species that performs acrobatic jumps and aggressively takes topwater flies.

There are basically two distinct seasons that dominate our fly fishing experience in the lower tropical waters of both the Caribbean and Pacific coasts of Costa Rica. This is the distinct wet and the dry season, when the water levels in the rivers and lagoons are found to be influenced by the weather patterns along the mountain ranges that divide the country. Heavy rainfall in the mountains will cause river levels to fluctuate suddenly and this brings a lot of food and fresh water into the drainage systems on both coasts. The sportfish also react to this bounty of food and the fresh oxygenated water which certainly stimulates their feeding activity. 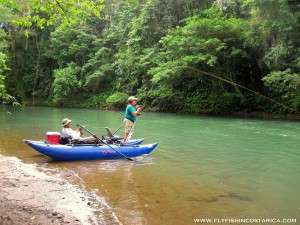 Tight to a machaca on one of our favorite jungle rivers. Note the color of the water – ideal for machaca on topwater flies.

During the wet season the machaca feeds mainly on sub-surface insects, small baitfish and worms, beetles or grubs that are dislodged by heavy rainfall. When the dry season brings in bright sunshine skies, wind gusts and abundance of flowers, the use of  floating flies in flower patterns and colors, the buggy deer hair poppers and even some insect patterns in bright colors will stimulate instant strikes.

At any time of year, our float trips start early in the morning and the fishing is usually immediate as we cast the poppers under the trees, as far back as possible and near the shore line. Here the machaca wait for anything that resembles some of the food choices that are present at that time of the day. As this daylight progresses and the wind gusts ruffle the tree canopy along the river, the falling insects, fruit and in some instances flowers make for a feeding frenzy and immediate strikes are experienced. The casting of the surface popper has to be presented with little or no finesse since the falling fruit like poppers have to land on the water surface with a loud weighted popping sound. Then no movement of the popper is done, just leave it to drift naturally with a tight fly line for an immediate reaction when the machaca strikes. A line strike is preferable. The use of a wide gape hook also offers a better hooking possibility with the fruit and seed imitation poppers. The machaca possess formable teeth that make radical damage to many poppers.

We fish only the most beautiful, most pristine rivers to ensure a very beautiful trip, drifting down a tropical jungle lined river with lots of wildlife to be seen. We usually fish two anglers to a boat and stop regularly for rest stops and to see some of the wildlife encountered. At times we stop to afford many casts to feeding fish under particular fruit or flower producing trees. Sometimes the monkeys feeding in the trees offer a harvest of partially eaten fruit falling to the waiting fish below. 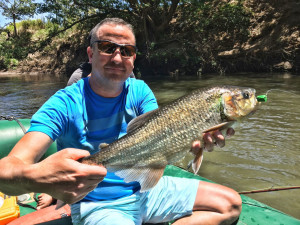 Client Aaron Fridz shows off a beautiful machaca taken on a popper.

We regularly see troops of monkeys moving among the trees and even some other mammals rushing through the underbrush with an encounter with some crocodiles and many wader birds that have their preferred roosting trees and feeding ponds along the river. Iguanas are seen in various sizes with the occasional “Jesus Christ” lizard surface walking on the water between tree stumps.

The float trip lasts an average of six hours and is sometimes able to produce some snook and snapper along with the usual machaca. We prefer using 7 wt. fly rods with bug tapered floating lines. The snook and snapper generally prefer streamer flies in baitfish sizes and color tones.

Averaging about 7 to 10 fish per trip with the occasional trophy machaca weighing 7 lbs. to add to the excitement of the day. These acrobatic fighting sportfish are a real treat for a fly fisherman seeking a unique adventure in our tropical waters. 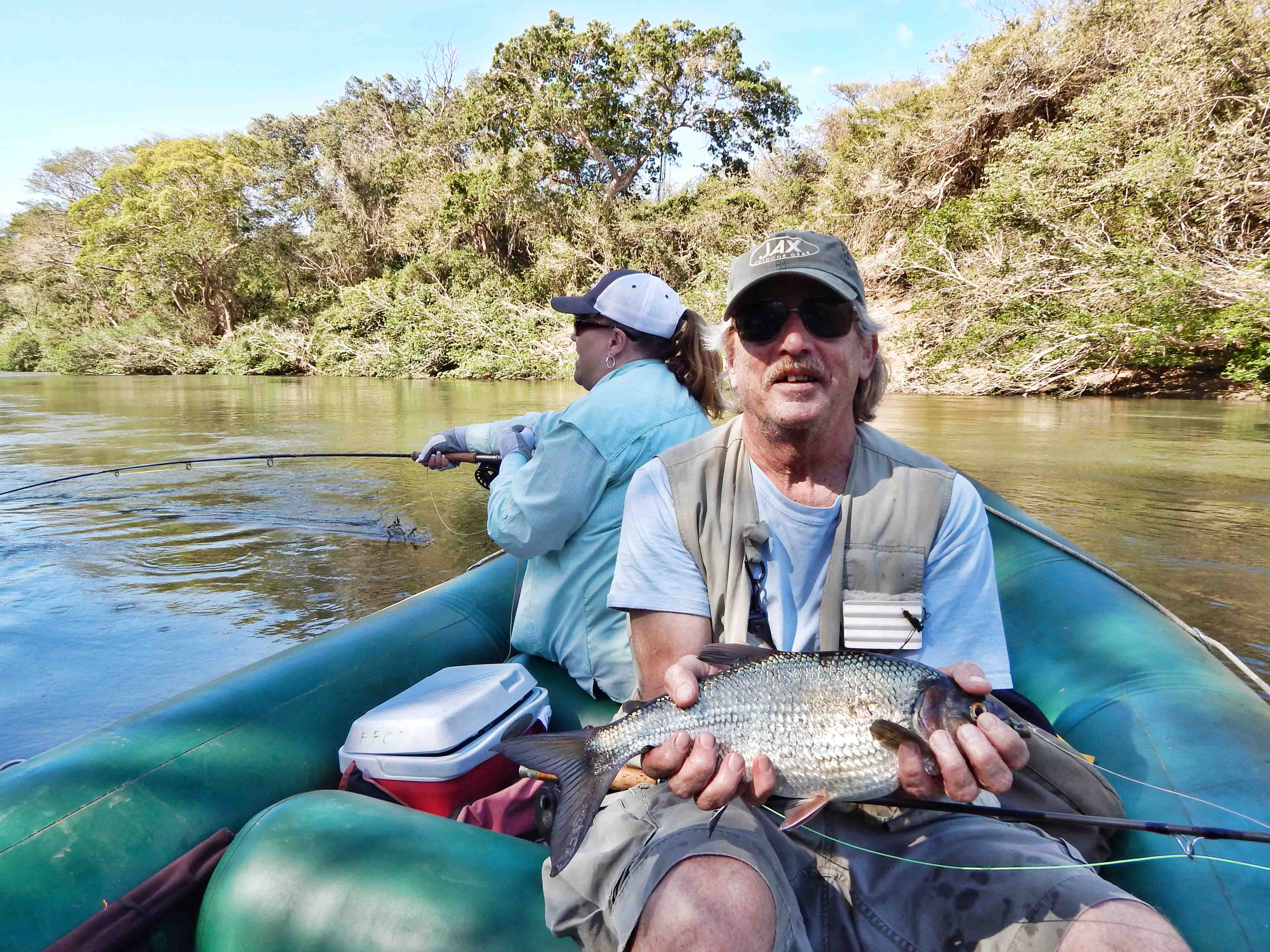 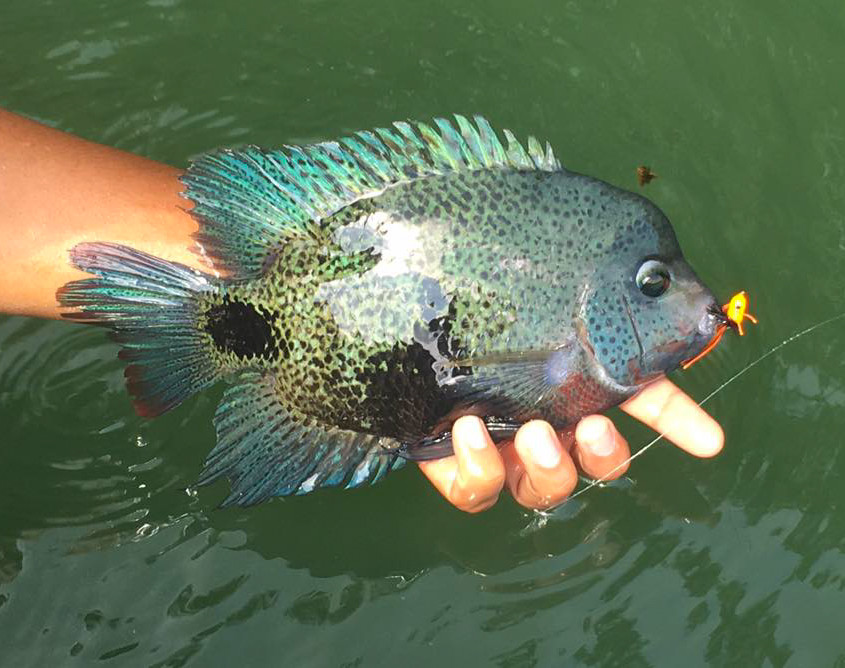 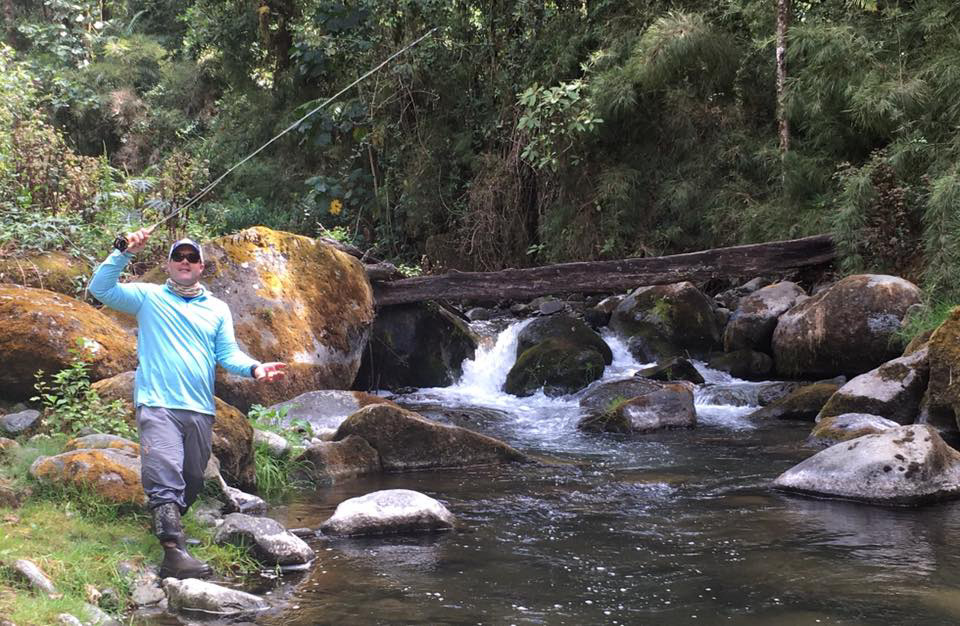 Fly fishing the cloudforest for trout.

We’ve just returned from a 6-day trip with client Chris, of California. Chris, a fly-fishing guide himself, had contacted us 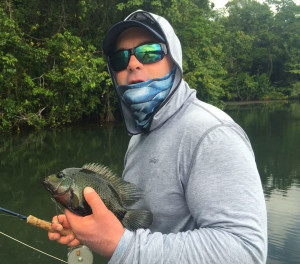 A beautiful mojarra, one of Costa Rica’s most under-appreciated fly rod gamefish.

to help arrange a custom trip and to guide him to some of Costa Rica’s more unusual, and more remote, fisheries. He wanted to catch trout in the cloud forests, then try for snook and tropical panfish in the lowland rainforests.

Our trip began high in the mountains above San Jose, near 9,000 feet, where we fished our favorite cloudforest river for trout. The fish were abundant, and hungry — and our two days fishing there were highlighted with great looks at one of the rarest, and most beautiful, of Costa Rican bird species, the resplendant quetzal. These birds — rarely seen even by the most avid of birdwatchers, are  often easily spotted on our fly fishing adventures.

After getting our fill of trout fishing, we changed gears — and lightened our clothing — and spent the remainder of the trip fishing in a roadless, remote jungle area along the northwestern Caribbean slope. Temperatures here average 30-40 degrees warmer than in the mountains where the trout live, and the species diversity reflects the much hotter, more humid maritime climate. We fished uninhabitated lagoons and

rivers under the playful gaze of monkeys and toucans, watched dolphins swim and caught many different species of fish, including snook, while throwing poppers into pinpoint pockets of rainforest lianas and trees draped in bromeliads and orchids. Chris’ outstanding casting and fishing skills greatly improved his success.